Why a trip to Brazil to explore its gay destinations? The answer is quite simple: for its exuberance, its nature, its history, the culture of its Amazonian tribes.

But also for its social disparities, its mixture that makes it a rich and complex destination, which deserves to be discovered. Brazil is made up of fun, sun, drinks, parties all night long and beautiful people and all this makes it the best destination for a gay-friendly trip to remember.

Of course, Brazil is huge and has so many different amazing places you should add to your itinerary and it seems to be impossible to create a comprehensive complete and balanced travel plan to make the most of it. To organize your perfect trip to Brazil it is essential to start from the right destination, according to your needs and preferences.

Brazil is a country that offers a lot to tourists, sea, postcard beaches, history, culture, music, nature, sports, entertainment, etc. So according to your preferences, you can choose the best destinations in Brazil and organize a tailor-made holiday in Brazil. Or with all those hunky, gorgeous Brazilians, you might as well start filling out your Brazil visa application now cause honey, they are hot, hot, HOT!

This is the reason why we created this guide to the best gay Brazilian destinations for your next holidays so you will know exactly what really worth a visit.

Rio de Janeiro is a gay-friendly city amazing in architecture, in harmony with nature, in the way it is distributed throughout the territory. Here mountains, beaches, and forests are not the frame of a painting but the subjects themselves that make it up and make it a masterpiece.

The carnival world capital is really fascinating and mixes all the services of a great metropolis with a magnificent natural landscape. Also known as the Wonderful City, Rio has been elected the best gay and sexiest destination in the world for two years. Faithful to this reputation the city offers beautiful places to know and an infinity of exclusive services for the gay public.

One of the most beautiful things in Rio de Janeiro are the services offered by gay-friendly areas (Copacabana, Ipanema, and Leblon). If your hotel is in one of these neighborhoods, just go to the beaches that will happen there; mainly on the beach of Ipanema and Copacabana where you will find gay flags hoisted on the tents that sell all you need for happy hours, drinks, parties, and fun!

A small paradise on earth that often goes unnoticed among the many attractions that Brazil offers, and perhaps for this reason uncontaminated to the point of being considered the most eco-sustainable tourist destination in the world (according to the World Travel Market).

We are talking about a jewel called Bonito, an emblematic name for a place set in Mato Grosso do Sul, in a region dubbed ‘the Caribbean of the center-west’, because although it does not end up on the sea it does boast an endless series of bathing places with crystal clear waters.

This is the main attraction of Bonito: snorkelling in rivers and lakes so transparent and full of life that they seem to be the Caribbean Sea. A real natural aquarium, where springs, rivers, waterfalls, lakes, streams flow; the Formoso River is the great basin of the area, and among its crystalline waters live colorful fish, while on the banks a lush emerald green vegetation frames a setting worthy of ‘Blue Lagoon’, but also the river Da Prata and Sucuri offer possibilities of wonderful snorkeling.

Brasilia is the capital of Brazil, its territory is included in the federal district, washed by the Preto rivers, to the east, and Descoberto to the west.

It is spread over a plateau built with the aim of developing the internal areas of the country. The new capital of Brazil, Brasilia, built in only four years, is a jewel of modern urbanism thanks to its stunning architectural structures capable of leaving the visitor speechless. Brasilia is an almost completely new city, designed in the fifties of the twentieth century by Lucio Costa, according to the principles of the most advanced urbanism and the outline of a simple but at the same time symbolic project.

The ideal destination both for city lovers and for those who are looking for a place more in contact with nature and greenery. In fact there are numerous parks that follow one another, very large and wonderful, for example, there is a National Park characterized by a large presence of local fauna and flora that allows you to admire incomparable beauty. 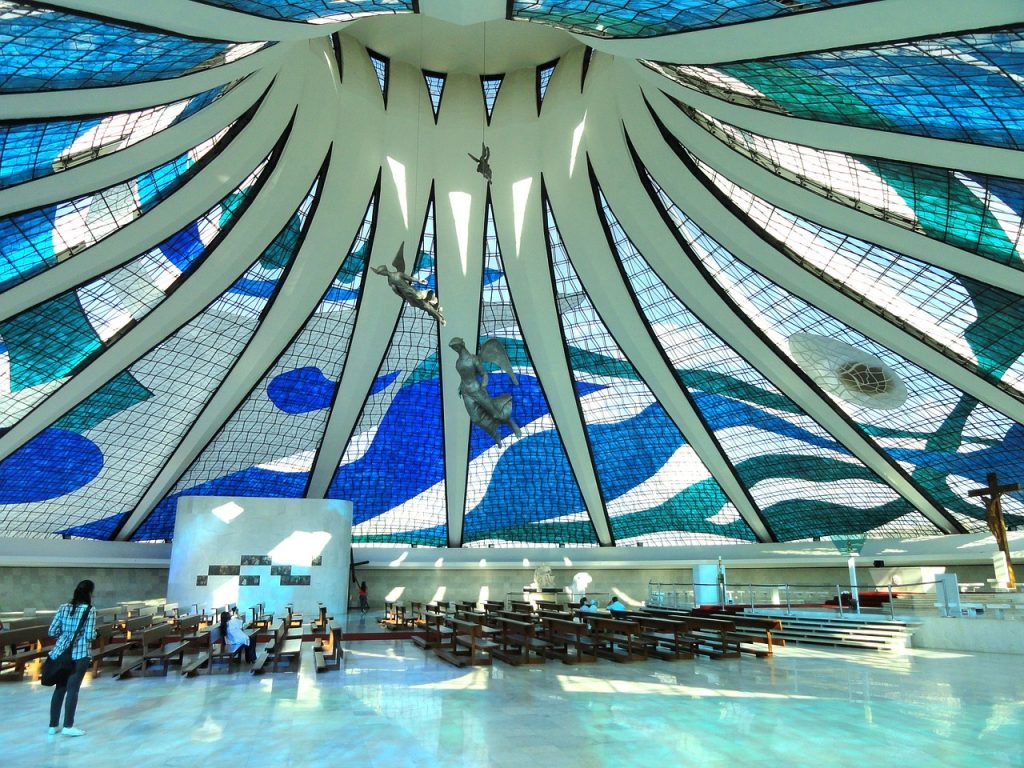 Established in 1981 in the Brazilian state of Maranhao, it is a spectacular geological area, unique in the world, 155 thousand hectares wide, which lies along 70 km of coastline, pushing inland in some points up to 22 km. The fine sand dunes, which reach 40 meters in height, in which they open, especially in winter, countless transparent lagoons of various shapes and widths, seen from above, due to the territorial morphology, make you think many velvets resting gently on the water…

Armação dos Búzios is a gay-friendly charming seaside town, which became famous in the 60s thanks to the frequentation by the French actress Brigitte Bardot. It is located in the Brazilian state of Rio de Janeiro, about 200 km east of the city of Rio, in the Southeastern Region.

The morphology of the territory describes a peninsula stretching towards the Atlantic, whose jagged profile welcomes more than 20 beaches. It was once a fishing village (in the eighteenth century it was a support base for whale hunters), today it is a popular destination for an elite tourism made up of both Brazilian and international holidaymakers.  In general, the beaches of the southern area are the most beautiful and most suitable for surfing, while the northern ones are more sheltered and close to population centers.

Among the most beautiful beaches, we mention Geribà, the long and wave surfing beach, Joao Fernandinho and Joao Fernandes are ideal for snorkeling, Ferradura, Ferradurinha (Small Horseshoe), Manguinhos, Turtle and many others.

Recife is a beautiful city in Brazil overlooking the sea of Pernambuco, a state considered the flagship of national tourism, and not only for the constant 35 ° C of its beaches and the emerald green of the sea. It is the same state of the archipelago of Fernando de Noronha and the town of Olinda, declared a UNESCO World Cultural Heritage.

Recife is a city of contrasts, where the ancient joins the modern. Portuguese, Spanish, Dutch and French colonies have left their mark in the city, including museums, fortresses, bridges, monuments and neoclassical buildings. Built on canals crossed by bridges, it is also called the Venice of Brazil.

Fortaleza with its 35 kilometers of beaches is a city to experience on the sea and beyond. As clearly indicated on the city’s coat of arms, this city, capital of the State of Ceará, an area in the north-east of Brazil, sums up the very essence of “Fortitude”, ie courage, value, and strength.

With its large and dynamic port overlooking the Atlantic Ocean, Fortaleza is divided in half between the tourist vocation and the commercial tradition. Sunny and in full economic and urban development, this city welcomes visitors with miles and miles of white and fine beach. Not only the sea, Fortaleza reserves to the most curious pleasant surprises, all to discover, contained all in the pleasant and alive historical center. The fourth most populous city in Brazil manages to seduce the many tourists who visit it every day thanks to a contagious reception and unforgettable beaches.

The birthplace of the famous composer Alberto Nepomuceno, Fortaleza is also known as the capital of the joy of Brazil, thanks to the intense nightlife not only limited to the traditional Carnival or New Year period, which makes it very busy even for tourism internal, as well as international. Reason for visiting the city are also the beaches and also the beauties of the historical center.

Florianopolis, about 500 km from Porto Alegre, is the capital of the State of Santa Catarina. Florianopolis has the cheerfulness and carefree typical of the green-gold nation, but has managed to contain – even if not completely avoid – the gigantic dark side of the nation: violence and poverty that in the other states are the master by the side of this unique and unmistakable celebration.

Florianopolis, more commonly called Floripa has another feature that makes it unique: it is partly on the mainland and on the continent, partly on an island. This gives the city an unmistakable style and geography, as well as making the variety of activities on the territory extremely rich.

If you are in the city just the days of the carnival, then the step is complete. Premise: Floripa is ideal for those who want to experience a real Brazilian carnival without the stress and delirium that characterize that of the big centers like Rio.

It is one of the main cultural centers of Brazil, so traveling to Salvador de Bahía is a must because of the unique cultural diversity that is expressed in the mix of Amerindian, European and African traditions, which are reflected in its gastronomy, folklore and in its handicraft production. The main attraction that has to offer tourism in Salvador de Bahia, is the old part of the city, known as Pelourinho, which was declared a World Heritage Site by UNESCO, as well as being the largest set of colonial buildings in Latin America, integrated by more than a thousand mansions, houses, palaces, convents and churches, in baroque style, from the sixteenth and seventeenth centuries.

Plus, the city is surrounded by beaches, where you can relax, practice water sports, exercise outdoors, dance, taste gastronomic delights, good drinks or simply socialize. The carnival of Bahia is unmissable, considered one of the most important in Brazil.

Once known primarily as an economic and business center, the city of São Paulo, the largest and most populous of all of Brazil, attracts millions of tourists today thanks to its museums, art galleries, and nightlife. In addition to the impressive skyscrapers and breathtaking landscapes, San Paolo offers several historical sites to be discovered and explored.

Parks and gardens are among the busiest attractions, especially at weekends, and an ideal place to stay, to relax and have some fun. São Paulo is one of the biggest centers of LGBT tourism. As well as being the second largest city in Latin America, it is also home to its most important Pride. The event attracts over four million people every June, from all over the world and anxious to dive into it. Beyond the Pride, the gay scene of São Paulo attracts for its variety and the many options that await the traveler.

The LGBT premises of San Paolo meet every need: from small pubs to cruising bars. Gay nightclubs host a wide range of live shows, featuring drag queens, striptease, singers and DJs from all over the world. Parties are the order of the day, although they are more numerous at weekends, and frequented by both tourists and locals. San Paolo for gays, in short, is a continuous party.

Want To See More Of Brazil? Get Inspired By These Epic Tour Itineraries 🤩