Often overshadowed by the raging gay scene in Mexico City, Puebla – just a few hour’s drives away – has quietly and steadily grown its own unique gay scene that is beginning to tempt tourists away from the chaos of Mexico City.

Combining historic architecture, famous food, and a decidedly slower pace of life than Mexico City with an expansive gay scene seems to have been a winning formula for Puebla, which has gone from strength to strength since establishing a National Day Against Homophobia in 2017 (May 17th) and Puebla Pride (held every year in June) which was quite the move for a city once considered a stronghold of conservatism, tradition and Catholicism in Mexico.

With a population of 1.5 million, Puebla is no small city – and the thriving nightlife and arts scene is a testament to this.

Travelers going to experience gay Puebla can expect to tour beautiful churches and an incredibly well-preserved old town covered in painted ceramic tiles by day and indulge in famed mole poblano by night before heading out to one of the many gay bars and gay clubs in Puebla.

Top this all off by staying in a gay-friendly luxury hotel in Puebla, and you can see why LGBT travelers in Mexico are flocking to Puebla in droves!

Note: Same-sex marriages became legal in the Mexican state of Puebla on 1 August 2017 and have energized gay life in Puebla, as it has across Mexico, especially in states where it is legal. Mexicans, in general, are becoming more accepting of differing sexuality and lifestyles, though the Catholic Church’s influence remains strong. Thankfully, LGBT travelers rarely experience open discrimination or violence.

Gay travelers in Puebla should take special care in less developed areas in terms of public displays of affection where many residents may be less exposed to LGBT culture and may hold conservative attitudes…Though any reaction is more likely to be curious than outrage.

Overall, Puebla is very safe, especially compared to other Latin American cities, and a common-sense approach to travel will generally ensure you have no issues exploring this beautiful and diverse city.

The city of Puebla is one of Mexico’s most popular tourist destinations in large part because of its diverse mouth-watering culinary heritage, awe-inspiring colonial architecture and close proximity to Mexico City.

Most of the top attractions of Puebla can be seen wandering the historic downtown, but there are a few things you will not want to miss. Adventurous travelers will want to make a day trip to the nearby famed volcanoes of Mexico, Iztaccíhuatl and Popocatépetl, for some unique hiking.

Don’t forget to steep inside the Talavera tiled Casa de Los Muñecos or Casa del Alfeñique to see amazing examples of the Puebla tiling that helped bring this city UNESCO status. For lovers of Mexican Art, you should plan time for a visit to Museo Amparo, which is not only free but has incredible views out over the city.

If you have had enough of the old town Xanenetla, once one of Puebla’s most dangerous neighborhoods, is now a great option for street art and cafés for the artsy type; closer to town is the famous Frog Alley, which is jam-packed full of antique dealers and artisanal furniture hawkers if you want to pick up something special.

As previously mentioned, Puebla has a very gay-friendly vibe, and with so many places to explore (and a booming foodie scene), there is no need to limit yourself. Below are a few of the more popular, trendy places that have opened and you really should try to visit, perhaps as a warm-up for the crazy gay nightlife in Puebla, Mexico.

Just no matter what you do, don’t forget to try the delicious mole poblano, which is chicken or turkey served under thick chili and chocolate sauce. Today it is considered the national dish of Mexico (not tacos, who knew?), and any local will proudly tell you how it originated right here in Puebla.

The battle of the Twin Taco Titans in Puebla rags on between the two taquerias La Oriental and Tacos Tony, though in our minds, Tony wins out on price, service and tastier meat.

You can’t go to Mexico and not have churros, right? And this is the place to fill your cravings – through you. If you don’t enjoy the spectacle of queuing in Mexico, you best come early!

A centrally located coffee shop popular with gay travelers in Puebla for an opportunity to people watch.

Located in a gorgeous colonial courtyard, they serve a variety of traditional poblano dishes – though the best is the house’s special five kinds of mole. Great service and strong cocktails!

One of the top restaurants in town, serving Mexican food you have never had before. With stylish fit-out and a very sophisticated clientele, La Noria is also known as one of the best places to try Mole Poblano though there is also a wide variety of other tempting dishes available.

Hyper-chic with Instagrammable food for days, this is one dining experience you don’t want to miss if you love the ‘modern spin on a classic dish’ experience.

In Puebla, Mexico, you would be hard-pressed to find a major hotel that had any issues with gay guests  – but some hotels are more popular with queer travelers due to their location and inclusive environment or vibe, which are featured here.

This gay-friendly hotel in Puebla is frequented by members of the LGBT community and has a great reputation. Each hotel and area offer something very specific, so be sure to choose the right style and location to meet your needs.

Prices are cheap compared to North American and European hotels (thought quickly rising), and standards are high – so it’s a great place to splurge! Of course, there are also hundred’s more hotel and hostel options in Puebla if none of these suit your desired budget, facilities or area!

For those who want to party or meet other travelers, this eclectic and colorful hostel has a reputation for openness and inclusivity.

A straightforward hotel located in the historic center with clean rooms. Low-key with private bathrooms, this is the cheapest private room in Puebla with good reviews.

A gay-friendly hotel in Puebla with elegant, old-world rooms, and suites with balconies overlooking the historic center. Set in an 18th-century house, this is a great option for a polished hotel in Puebla on a budget.

Well known as a gay hotel in Puebla, but in reality, it is mixed. Set in a 17th-century former corn exchange, expect a low-key hotel with some ornate features in a location that cannot be beaten.

Another great mid-range gay-friendly hotel in Puebla on a quiet side street just a few minute’s walk from all the action. Expect to bump into other LGBT travelers in the central courtyard, which is a great place to relax and chat.

Strikingly modern, this contemporary hotel is housed inside recycled shipping containers. Minimalist yet outrageous, this is not your average hotel. There is an on-site cafe with a gym and rooftop terrace.

Sleek and modern, this is a popular mixed / gay hotel in Puebla, thanks to its well-known brand and standards. With a beautiful pool and stylish restaurant close to the main business district and shopping malls, this is one of the most booked hotels by gay travelers to Puebla.

Elegant and refined, located in a Spanish Colonial–style building on a quiet cobbled street in the central city. Large rooms with wood-beamed ceilings and four-post beds make this the option of choice for a Gay Puebla romantic getaway.

Newly opened with stunning views and an infinity pool on the rooftop, this is a refined hotel housed in a stately old stone building a 15-minute walk from the historic center. There is an on-site spa, farm-to-table restaurant and gym. 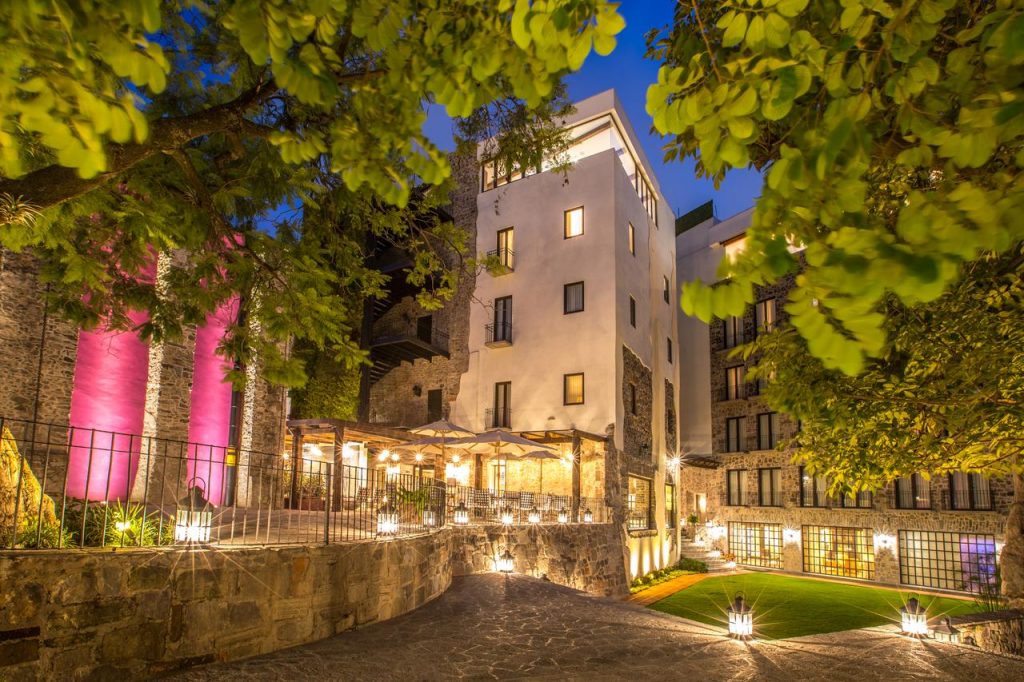 While the beautiful colonial architecture and delicious Mexican food may lure you in – It is the Puebla gay bars and clubs that really make Gay Puebla worthy of a visit for your vacation. Anyone who knows anything about Mexicans knows they love a good fiesta, and while Puebla might be laid back and chilled by day, its nightlife is anything but!

New clubs and events are taking place consistently here, so it pays to ask around when you arrive (hotel staff is a good bet), but at the moment, here are the most popular nightlife spots and gay clubs in Puebla for travelers and locals. Things will get crazy – but just go with it. Just don’t forget your common sense.

(Temporarily or permanently closed. If you know something, please suggest an edit.)

A gay nightclub that has been on the Gay Puebla scene for many, many years. Its staying power comings from its incredible dance atmosphere, sexy go-go boys and world-class drag acts. this is one place you don’t want to miss!

A small gay bar that is known to go off thanks to its incredible drink specials. A great place to start the night and see what happens, especially on a Friday when plenty of locals head here.

A cute little gay / lesbian cocktail bar with a rainbow flag funning outside. Popular with the young and trendy crowd, there is karaoke here, a great happy hour and themed parties (check out their FB page).

Large dance venue with disco balls and lighting with a heavy focus on nightly drag shows. Recently closed down and opened up at another venue, but plenty of big gay events and DJ parties.

A no-no-sense gay beach bar, though the mixed crowd is welcome. Perfect for a beer and a chat and to strike up a conversation.

While the original location burned down, Zuntra is back in a new location. DJs pump out everything from quintessential gay music to salsa, merengue, and reggaeton, and while it’s a gay club, it is very popular with the alternative scene, also. Nightly stripper shows, but somehow remains very classy, so dress to impress.

Unlike some more Western countries, saunas and bathhouses in Puebla are still all the rage. Here are the three biggest, with a reputation for being friendly to foreign travelers. Be aware that rent boys are somewhat common in saunas here, but at your own risk.

One of the nicest gay saunas in Puebla, and in Mexico. Safe with a mix of both locals and gringos, the highlight is easily the sun terrace on the top floor (though the three floors of sauna beneath are pretty great, too!). Well equipped with friendly service, this is the best sauna in Puebla.

A bathhouse in Puebla is quite far from the city center. Information is sparse, but you can check the Facebook page before going. Please let us know how it goes!

A centrally located sauna in Puebla close to the university district. Spacious with clean lockers and two types of steam showers

Finding it hard to envisage where everything is Puebla? Hopefully, this queer-centric map helps where we have marked all the bars, clubs, parties, hotels, saunas, massages and more will help you stay in the spot best suited to you!