But is it? Is the gist of things the same as dating a non-trans person?

What she likes in bed is different; her preferences on the kind of person she’d like to date are different, and so on. The same concept applies when you’re dating a transgender man (FTM). Experiences vary between individuals, so you shouldn’t take anything for granted. Before you jump into the dating pool, it’s always a good idea to familiarize yourself with a few things, and we’re here to help.

What You Should Know Before Dating a Transgender Woman

When you’re with a transgender woman, you should know that she might have had negative experiences with the people she’s dated in the past. Not all of them may have treated her like a woman or give her the respect she deserves.

Even if they’re attracted to her, there’s a possibility that they haven’t treated her how she should be treated. If you want to be different, here’s what you should know.

She’s Not a Fetish

The worst thing you can do for yourself or the woman you fancy is viewing her as some kind of fetish. Don’t ask her how she tucks her ‘penis.’ What if she doesn’t have one? If she says she’s got a vagina, don’t ask whether it looks ‘normal.’

She’s a person, not a novelty item.

Trying to objectify what’s in her pants or her genital reconstruction surgery is disturbing. Also, it’s a little too personal. It would be best to understand that talking about her private area isn’t a great topic for a date.

Don’t Give Her Backhanded Compliments

‘You look great for a trans woman, isn’t a compliment. When you compliment her, make sure you’re giving her a genuine compliment. Often, trans women have to deal with such compliments, and it’s a setback to them.

Giving her such a compliment seems like telling her she’s a fake or that she’s trying to be someone she isn’t. That’s not true; she is a woman just like any other.

Her Transition Has Nothing to do With Straight Men

Often, people think that trans women transition so they can sleep with straight guys. This isn’t true, and unfortunately, this type of ignorance has been fuelled by the media. Most times, a trans woman will openly say that she’s trans on her dating profile so that people don’t get the wrong idea of her.

It’s up to you to choose whether you want to be with her or not. Trans women can identify as lesbian or bisexual, and they can date whoever they want to date.

Dating A Trans Woman Will Not Change Your Sexuality

There’s no question that a trans woman is a woman. Your sexual orientation doesn’t depend on the attraction you have for a different gender identity. It’s important to understand that there’s a difference between gender and sex. Sex is rigid, and gender is fluid.

She’s Not a Secret

There’s plenty of stigma surrounding the transgender community. And, many times, a transgender woman will find that the person she’s dating wants to keep her a secret. This is disrespectful to her. However, the blame shouldn’t only lie on straight men.

Society, in general, doesn’t treat transgender people well, so it’s like a trickle-down effect. We all want to be shown off by the people we’re dating. So if you want to be in a relationship with a trans woman, be open about it and be proud of who she is.

She Fears Rejection Just as Much as You Do

Human beings naturally crave emotional connections with others. And, the fear of rejection from someone we like can bring even the best of us down sometimes.

Even if the girl you’re dating says she doesn’t care, make sure that she really doesn’t. Sometimes, people are scared because they think you won’t accept them for who they are.

She Isn’t Defined by Being Trans

Even if she tells you she’s trans on the first date, keep in mind that it doesn’t define her. She probably told you because she didn’t want you getting the wrong impression of her if you found out later.

Look beyond her being trans and get to know her for who she truly is rather than making wrongful assumptions.

Trans women face barriers in the job market in the form of discrimination. As a result, many have to live with poverty. This is why a huge number of transgender women turn to the sex trade or adult film industry for work. In addition, they become “top-seller” where straight men are involved, especially in the ‘shemale’ category.

However, we know that the p*rn or adult sex movie is unrealistic most of the time. You should always learn how to address a transgender woman respectfully rather than using offensive labels on her.

Just because she’s a trans woman doesn’t mean she wants you to treat her differently. She’s as normal as you are, and typical date topics would do just fine.

Ask her what her favorite food is, whether she’s enjoying herself, and what she likes.

Don’t Expect Her to Jump into Bed With You

Society has sexualized trans women in an unfortunate way. Just because you watched an online sex video doesn’t mean the woman sitting across the table from you wants to jump into bed with you now.

She might not be ready to get into bed with you, so give her time and space. 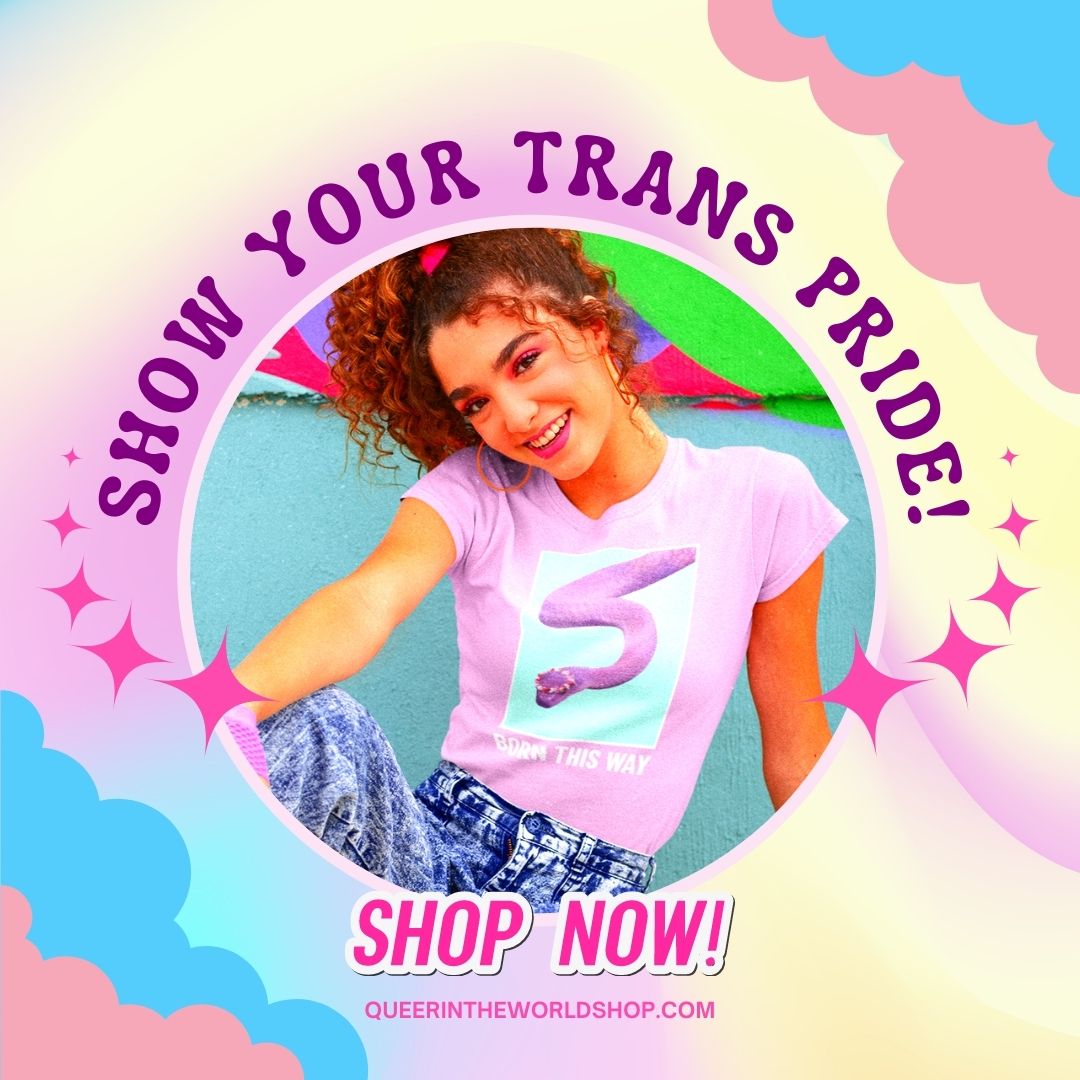 What to Know About Dating a Transgender Man

Now we have covered some basics about dating trans women, here’s what you should know about dating a transgender guy:

Well, only if you’re a guy. However, if you’re a lady and attracted to a trans guy, nothing will change about your sexuality.

The only thing it means is that you see them for who they truly are—a man.

You Don’t Get ‘The Best of Both Worlds’

So you think a trans gay will relate to you more? Think again, a trans man is a man because, to him, he’s never been a female. Sorry.

He might have been stuck in a woman’s body, but that doesn’t mean he understands them any better.

Remember that your gender is not the same as your sexual orientation, so it’s possible.

Not All Transgender Men Have Had Surgery

Surgery isn’t for everyone, and some transgender men are comfortable with only receiving testosterone treatments. If hormonal treatments are enough for him to feel comfortable about himself, that’s ok too.

Keep in mind that not all transgender men are on hormones. Some don’t want the hormones for personal reasons, and others are waiting to get on them. Just because they look physically different doesn’t make them any less of a man.

Communication is vital in any relationship. If you’re feeling nervous about your first time with the guy you’re dating, try and talk about it beforehand.

Remember that everyone is nervous about their first time with the new person in their life.

Don’t Be Ashamed of Being With Them

So, listen. If the guy is open about him being transgender, you shouldn’t hide it either. There’s no reason to tell the whole world either, but it would be great if you offered them support.

Transgender people need someone that can be there for them, not those that are embarrassed about them.

Trans Guys Have Insecurities Too

Everyone has insecurities about their body. Transgender guys aren’t any different. Remember that they’ve gone through puberty in the wrong body, so their insecurities might be heightened.

Be honest with your partner and talk to them openly about their triggers.

Lower Surgery Comes in Many Variations

When one is on testosterone, the clitoris starts growing into a small penis. Surgery to enhance what’s already there is called metoidioplasty. The most common type of lower surgery is phalloplasty. It involves the grafting of skin to create a penis. Both phalloplasty and metoidioplasty have different variations.

Again, none of this is anything you should discuss on a first date, or until he is ready to discuss with you. We only include these here you could can be aware of some of the broad terms he may use if and when he is ready.

There’s More to A Person Than Being Trans

Being trans is who trans men are, but that’s not all. First, they’re human, just like you. They all have different interests, personalities, and goals.

While each one is different in their unique way, they’re just normal men.

They Can Have a Sense of Humour

Dating a transgender guy isn’t like walking on eggshells. Especially if they’re comfortable and confident with who they are.

They can be funny and have great personalities, so don’t be scared to let yours shine.

Other Tips for Dating a Transgender Person

Educate Yourself And Learn the Basics

Be proactive and show them that you care. When learning about transgender people, it’s good to get information from objective resources rather than politically charged ones.

Ask Your Date How You Can Make Them Feel More Comfortable

This includes their preferred pronouns. Don’t use a particular pronoun just because your date looks like it could fit.

When touching your date, they should always be comfortable with what you’re doing; if they aren’t, please stop. Body dysphoria isn’t easy to navigate, so if a trans person asks you to stop touching a specific part of their body, do it without any debate or imparting guilt.

There’s More To Them Than Being Trans

There’s nothing wrong with having a preference for trans people. However, don’t let your preference trick you into making it an obsession where you objectify trans people.

When you start fetishizing a transgender person, they might run from you. Keep in mind that they’re transgender for themselves and not so you can have someone to date.

People Will Judge You For Dating Them

Transgender people often experience a lot of discrimination. And, when you’ve been dating one for some time, people will find out. You have to be ready for the social consequences of dating a transgender person.

There’s nothing wrong with getting attracted to a transgender person. If you’re in a part of the world where you’re at risk of ostracization or physical gender, it may be a good idea for you and the person you’re with to protect yourselves and take precautions.

Avoid blaming the transgender person you’re with if people judge you.

Even if you love their body as it is, they might still want to change it. Transgender people might be going through body dysphoria, and changing it is the only thing they might feel comfortable with.

Don’t pressure them into staying exactly as they are because this might prevent them from being who they truly feel they are. Instead, offer them support and learn about how these changes affect them and how you can offer them support.